Droning Added to What We Offer

We often were on location looking for that shot that would compliment the story and bring a new perspective. Drone photography offered us that new view. So we have geared up, fully licensed and registered with the FAA offering that “unique perspective” as part of our top level expertise and professionalism.

We had the pleasure of interviewing Lila Terry, a Miami Beach gay bar owner during the 1970s and 80s, almost two years ago for the Visual Memoirs project. She was delightful. Lila, died this week. She was 85. In this excerpt she talks about the bar/clubs she ran on the Beach at the corner of Park Avenue and 23rd Street.

We were asked by the Community Redevelopment Agency of South Miami to do a video that would document the history of Black settlement and development in the city. We had produced a well received video about the history of the City of South Miami which prompted the CRA to ask us to produce a video focused on the city’s Black community that developed parallel to the White community across the tracks, in the segregated south.

The first thing that struck us was the lack of documentation from what was a dynamic Black commercial and residential area: few pictures, a scarcity of newspaper reports, and little documentation. The area didn’t even have running water, sewers, paved streets or sidewalks until the 1950s and 60s. The story of Black Town, as some residents called it, was a tale of a once dynamic community decimated by rezoning that closed home businesses and gentrification which forced the dwindling number of Black residents to sell out in search of more affordable areas.

The Black church congregations continue to shrink in the area as plans for new low cost housing continue to be stalled.

The Other Side of the Tracks from Carl Hersh on Vimeo.

NARCOTECH, the one-hour documentary that we helped produce and shoot, that explored the technological extremes and strategies developed by narcotraffickers to make and export drugs, was nominated for an International Emmy. The program was produced by MAZDOC, a Colombian documentary producer, and premiered on the Fusion channel in English and in Spanish on Univision. 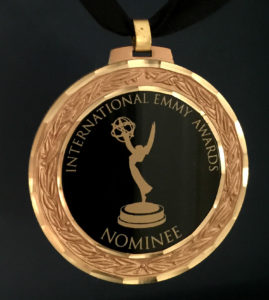 We just premiered our profile of Barbara Capitman to an enthusiastic full house at the Wolfsonian-FIU on Miami Beach. The showing, followed by an enthusiastic Q & A, was the opening event of this years Art Deco Weekend.

It was Barbara Baer Capitman’s vision and persistence that helped turn a rundown area of Miami Beach into the vibrant Art Deco historic district. Arriving on Miami Beach in 1973, Barbara was struck by the neglect of what she recognized as an artistic treasure — the hundreds of buildings constructed in the Moderne style following the disastrous 1926 hurricane that pushed a wall of water across the barrier island that is Miami Beach.

Alex Daoud was first elected City Commissioner in 1979. He then served as mayor from 1985 until he was indicted on 41 counts of bribery on October 29, 1991. He served eighteen months in a federal prison. He was interviewed for the Miami Beach Visual Memoirs Project.

A bit of our backstory makes Pinecrest Magazine; on the back page, geared to people in the community.       Questions 1:

“How did your journalism careers get started? Carl started working in the NBC newsroom in New York, reading wire copy for NBC Nightly News when John Chancellor was the anchor. My start was in London working for the documentary division of an international news film agency. Later, I worked for the British Central Office of Information, covering events around the United Kingdom. I was a production assistant. Carl was a news writer, then an assignment editor for UPITN [United Press International Television News], a London-based film agency. When they had an opening for a crew based in Latin America, we were hired. We decided Mexico City would be a good base of operations, mainly because we had honeymooned there, which was the irrational part of the decision. The rational parL was we figured we could drive home if things didn’t work out. We covered headline stories throughout Latin America, became fluent in Spanish and learned to cook Mexican food. Our speciality is enchiladas.”

Excerpt of our interview with three term Miami Beach Mayor David Dermer. He talks about growing up on the Beach and how he has seen the Beach change over the years. He talks about his father being mayor in the 1960s and why his father opposed casino gambling, and the on-going tension between developers, the hoteliers and residents.

Where have we been…

Sometimes I can mark the passing of time by what I haven’t done… Looking at our website and realizing that there hasn’t been a new post here in almost two years is a shocking realization that my focus has been elsewhere: developing new sites (miamibeachvisualmemoirs.com and On-MiamiBeach.com), keeping up on Facebook (posting to at least three pages), making and keeping connections on e-mail, editing new productions and the endless collecting and paying of bills.

What brought me up short was to get word out that we are showing our “Brief History of South Miami” to the South Miami City Commission this evening. This is the story of a classic Southern town, created with the coming of the railroad, whose tracks marked the separation line between White and Black. The link to view the video is below…

A Brief History of the City of South Miami from Carl Hersh on Vimeo.

Lending a Hand for Carter Inteview 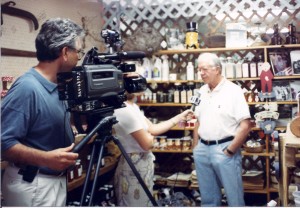 Local reporter interviewing President Carter
as I do honors on camera.

Came across this photo taken in Plains, Georgia in 1996. We were on a family vacation heading north but took a side trip to Carter country. That’s Jimmy being interviewed by a local news reporter on the occasion of the dedication of Billy Carter’s gas station as a newly minted museum. The reporter, on one of her first outings as a one-person news gather, was having problems doing set-up and interview prep with a very patient former president. So, I volunteered my services behind the camera on her shoot. Also had a chance to chat with Carter about the last time we had met during the 1988 elections  in Panama when I shot an  interview with him for Nightline. As head of the international group of poll watchers,  Carter was placed under brief house arrest by Noriega’s forces to prevent him from speaking to the press about the “stolen” election. His comments on Nightline were blunt and forceful.