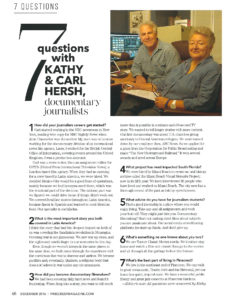 A bit of our backstory makes Pinecrest Magazine; on the back page, geared to people in the community.       Questions 1:

“How did your journalism careers get started? Carl started working in the NBC newsroom in New York, reading wire copy for NBC Nightly News when John Chancellor was the anchor. My start was in London working for the documentary division of an international news film agency. Later, I worked for the British Central Office of Information, covering events around the United Kingdom. I was a production assistant. Carl was a news writer, then an assignment editor for UPITN [United Press International Television News], a London-based film agency. When they had an opening for a crew based in Latin America, we were hired. We decided Mexico City would be a good base of operations, mainly because we had honeymooned there, which was the irrational part of the decision. The rational parL was we figured we could drive home if things didn’t work out. We covered headline stories throughout Latin America, became fluent in Spanish and learned to cook Mexican food. Our speciality is enchiladas.”