We started working on the NarcoTech project almost ten months ago. The one-hour program premieres this Sunday on the Fusion cable channel (Fusion.net), the joint English language vehicle of ABC/Univision. We researched and produced the U.S. segments, shot the HITRON and USPS footage, and translated the Spanish script for an English-speaking audience. The Spanish version airs on Univision later in the summer. We’ll keep you posted…

Why We Get Busy in Winter 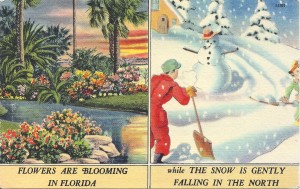 Not surprising, really, that we get busy in the winter. This vintage post card from Miami’s 1950s boom years contrasts our distinct climate and impulse for the southward migratory route of the multi-national snowbird, in its full mating plumage.

The Story of Rey Mambo from Carl Hersh on Vimeo.

We launched our latest video — part of the Miami Beach Visual Memoirs project — last night at the Deco Welcome Center. Aimed at middle schoolers, the video is about how 13-year-old Marvin moved from Brooklyn to Miami in 1938 and fell in love with all things Latin. 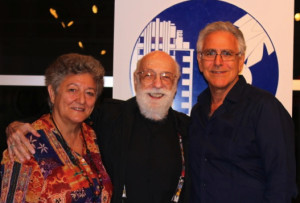 Kathy, “Rey” and Carl at the premiere of “The Story of Rey Mambo.”

Marvin spent his WWII military career playing bongos with a Puerto Rican band entertaining troops across the country. His return to Miami marked his transformation into Rey Mambo.

The video, along with a teacher’s curriculum guide, will be available for download — for free — from the MDPL website.

“No Place for Hate”

We’re lucky in that we often get involved in stories that are not only interesting but give us insights into how our society might be changing. Last week we  shot at the Cutler Bay Academy, in Miami, which has just earned its 3rd consecutive “No Place for Hate” award from the Anti-Defamation League (ADL). The award is not the story. The remarkable thing here is how a troubled school has internalized and infused a sense of caring and concern for other people throughout the curriculum and school culture. From morning announcements to academics and art this place has a sense of community and respect. These people don’t just talk about being against bullying, they live it.  From a tough school with a reputation, this year they had only one reported incident of bullying.

This film compilation shows a variety of Harryhausen’s work, starting with Mighty Joe Young in 1949 —  the Oscar-winner that year for special effects. Harryhausen served as Chief Technician on the film to his mentor, Willis O’Brien, creator of the original King Kong (1933).

The Ray Harryhausen legacy cannot be overstated. It wasn’t just the stop action miniatures that he animated that gave his storytelling impact, it was his ability to seamlessly combine live actors and the miniatures using the technology available. This wasn’t CGI but matching miniatures shot frame-by-frame with live action projected onto glass plates with areas matted out to match the action.

Steven Spielberg said it best, “without his work there never would have been a Star Wars or a Jurassic Park.” Take that a step further,  it was this ability to visualize the incredible that is the basis filmmaking.

The zoom lens, invented more than a century ago was first used in feature films in the 1930s. Mostly adapted to optical printers in the 30s and 40s, it was Alfred Hitchcock who first brought attention to using the zoom in his 1951film, Strangers on a Train and then, again, with his 1958 film, Vertigo, where he used an effect with the lens to create a sense of dizziness. The zoom lens came into its own in the 1970s when economic pressures pushed directors to use the infinite focal lengths available with a zoom lens to replace their fixed focal length prime lenses, thus saving set-up time and money.

Back to the Camera — What a View

This is a “must watch” assemblage. POV on steroids. The grandeur of the cinematic perspective.

The Brains Behind the Camera

Brains Behind the Camera from Carl Hersh on Vimeo.

While this video blog post was inspired by the new equipment coming amid the buzz of the Las Vegas NAB convention, it really is focusing on the relationship between the creator and his tools — it’s not the gear, but the brains behind the camera, that makes the difference.

Can the tiger change its stripes. The answer is, “we’ll see.” 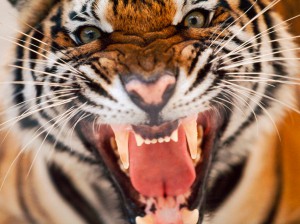 Tuning in to what was advertised as “streaming” from the National Association of Broadcasters convention I caught a pre-recorded conversation with the NAB’s new tech guy, CTO Kevin Gage, talking about the NAB Labs and Innovations initiative he heads within the organization. His main point was that broadcasters have the credibility to be the new nucleus around which internet ventures and audience interconnectedness can coalesce. He said broadcasters are the known quantity which the public relies on, so with continued convergence in cyberspace, who else but your local broadcaster will be there to lead the way into the future.

I guess I would believe this if local broadcasters, especially as we see them entrenched in the NAB, had not been the persistent retrograde force against change and development. Historically, they have been the brakes on change and development, not the new core for development. Station owners like their 20+ percent return each year and are not about to try anything new. The owners — and they are the deciders, let’s be clear — are a Republican bunch. They don’t embrace change. They would like the status quo to go on as long as possible.

They believe what happened to newspapers can’t happen to them. Can they change and adapt? I think, like the tiger, that those stripes are too much a part their DNA. In the end, when reality and desperation faces them, they may grab a bucket of paint and try to cover those stripes, but I think, like the current stalemate in our Congressional political process, the move will only come when their very existence is on the line. And when that happens, they may have already been passed by.

Somebody at the NAB realized that the internet was out there when they saw a lot of the content — that should have been theirs — getting played on it. That’s why they created this CTO position…but only last year. Does that tell you they’re ahead of the curve? I don’t think so, but stay tuned!

Helping out a Non-Profit has its Perks 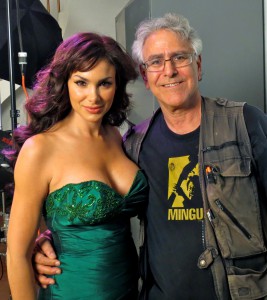 Helping out a non-profit has its perks. Here Panamanian actress Patricia De Leon — a former Miss Panama and regular on Univision and Anglo-TV — is ready for her close-up during a promotional shoot for PETA. She speaks passionately about her love of animals and dedication to PETA. This campaign is about vegetarianism; previously, she was a headliner on a campaign against bull-fighting.